The architecture studio LANZA Atelier was founded in 2015 by Isabel Abascal and Alessandro Arienzo and is based in Mexico City.

We understand the architectural project as a constantly fluctuating process which is subject to various forces, a malleable element. The models and drawings that we develop allow us to understand the precise moment in which the idea freezes and translates into constructive drawings.

The architecture of LANZA Atelier is conceived as the construction of a contemporary space whose energy can last forever. Still managing to function as a flexible artifact that accommodates changes of use and eventually changes of place, we like to think that we are designing a ruin. In our practice, the architectural concept and diagrammatic synthesis are the common thread of each project. The materials that we use are usually local, whether industrial or artisanal. This can give users a spirit of presence and identification with the place. At the same time that architectural projects are developed, LANZA Atelier experiments with ideas on a smaller scale. Furniture projects are approached as architectural projects. They test spatial themes, apply simple geometry, and are built with basic materials. The purpose of LANZA furniture is to establish close links with the space with which it lives and the people with whom handles it.

The leitmotiv of the practice of Isabel and Alessandro is to find and contribute to the beauty of the world.

LANZA has participated of the 12 São Paulo Architecture Bienal in 2019, has been nominated for the Debut Award of the Lisbon Triennale 2019, the 2016 Ibero-American Architecture Biennial Award and the Mies Crown Hall Award for Emerging Architects, IIT Chicago 2016. The studio is one of the winners of the Architectural League Prize of 2017 and was the first architecture studio to develope a Casa de México in Spain façade project. LANZA Atelier has been lecturers at TEC of Monterrey (Monterrey, 2018), at the CONSTRUCTING (engaged) PRACTICE symposium at GSAPP-Columbia University (NY, 2019), and at the University of Houston TX-MX series (Houston, 2019). In 2021, LANZA has also been nominated to the Brick Award for their project Forest House and to the Dezeen Exhibition Design Award for their project Re-Source at Storefront for Art and Architecture.
LANZA’s first solo show took place at SFMOMA from March until July 29, 2018.

Isabel Martínez Abascal graduated as an architect from the Universidad Politécnica de Madrid. She studied at the Technische Universität in Berlin and at the Vastu Shilpa Foundation in Ahmedabad (India). She collaborated with the studios SANAA (Tokyo), Aranguren and Gallegos (Madrid), Anupama Kundoo (Berlin) and Pedro Mendes da Rocha (Sao Paulo).

She has been design studio professor for six years in the Faculty of Architecture and Urbanism, Escola da Cidade, in Sao Paulo. She has participated as faculty at the 24th International Workshop of Cartagena, at the Ibero-American Biennial in Medellin 2010, at the International Seminar of Curitiba 2012 and at the Rio Olympics Workshop of the California College of the Arts 2012. She participated in the curating of the 10th Biennial Of Architecture of São Paulo, 2013 and curated the exhibition “13” for the inaugural cycle of the La Conservera Museum, Murcia 2014 and the exhibition “Visionary Instruments” by the artist Almudena Lobera for the ECCO Museum, Cadiz 2015.

Since July 2015 until August 2017, she was executive director of the LIGA, Space for Architecture platform in Mexico City, dedicated to the exhibition, dissemination and discussion of Latin American architecture.

Alessandro Arienzo is an architect who graduated with honors from the Universidad Iberoamericana. In 2012 he designed Archivo Diseño y Arquitectura’s inaugural exhibition “Happiness is a hot (and cold) sponge,” with Rodrigo Escandón. He collaborated with Taller de Arquitectura Rocha + Carrillo, Taller Tornel and Frida Escobedo, with whom he developed the conceptual project for the Mexico Pavilion at the Victoria & Albert Museum, London Design Festival 2015, the renovation of the Fondo de Cultura Octavio Paz bookshop 2013 and the Public Stage Pavilion for the Lisbon Triennial, 2013. Eager to explore the different possibilities of architecture, he develops research and publishing projects.

He was a recipient of the FONCA Young Creators Grant Program during 2017. 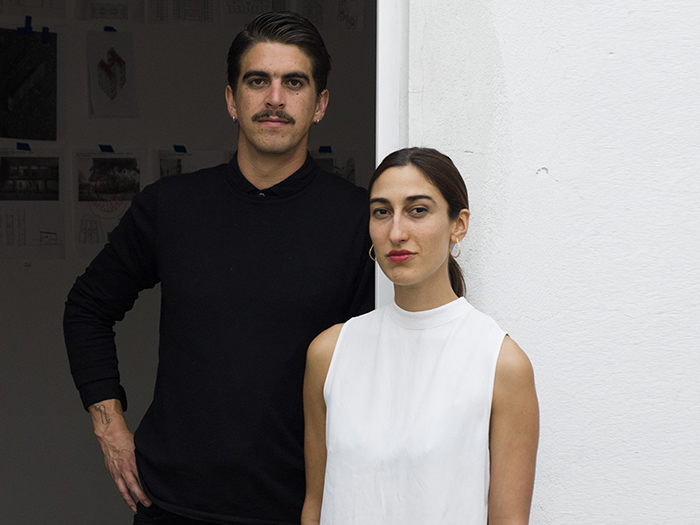