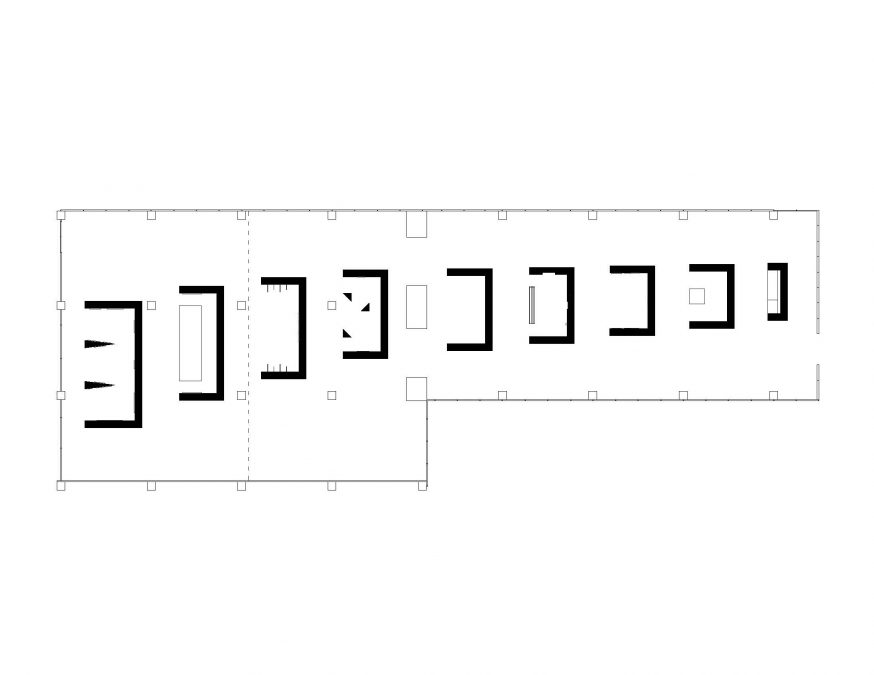 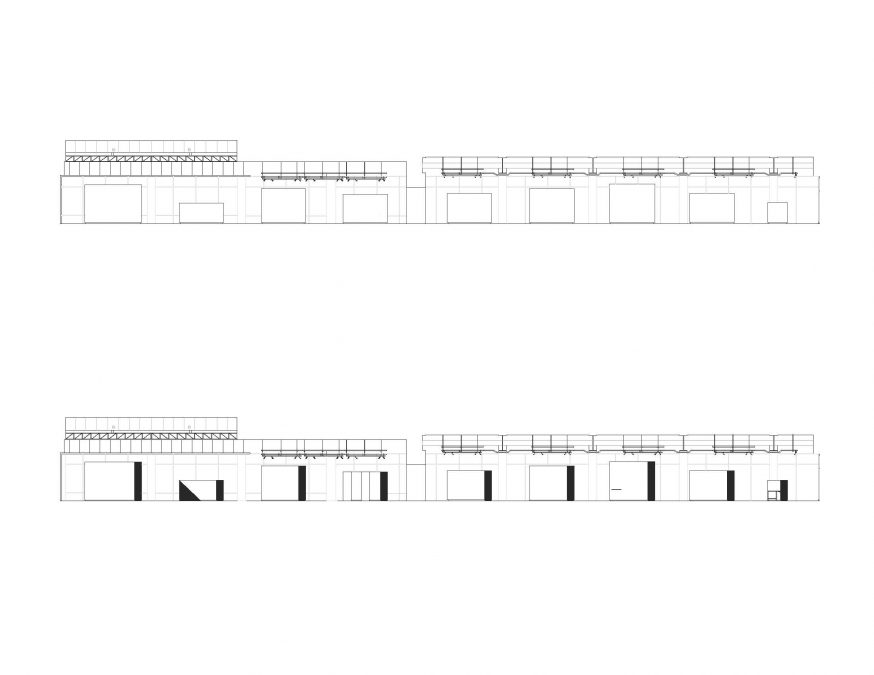 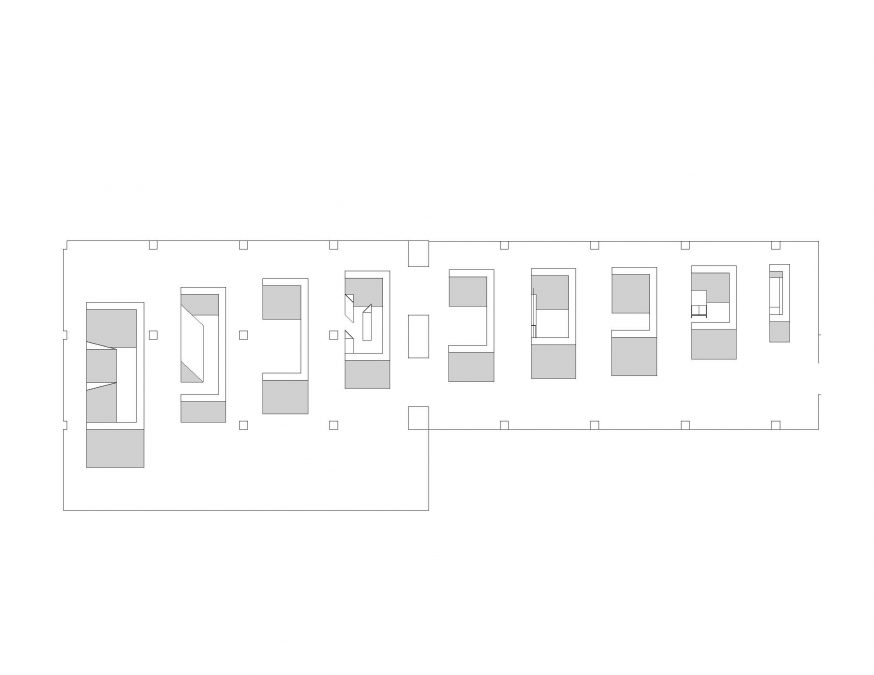 While exhibiting, we add a layer of thought to that which is being shown. Even when we are pretending to be objective, we add our vision to the existing discourse and inevitably interpret the object of the show. Maybe that is why exhibitions become moments of possibility and study; worlds that have drifted, in a sense, from a long term commitment, mere functionality and urban coherence. And thus a place where the unexpected can happen.

The first time we visited the “Sala de Colecciones Universitarias” (University Collections Hall) we found it opened towards the big “Plaza de las tres culturas” located on the North. On the other side of a blind wall, the central patio of the CCUT was hiding. We proposed to dismantle that wall which hid the southern glass façade in order to re-establish a dialogue, in historical tension, between the plaza and the patio.

When the wall was brought down, the sun re-entered the room. We responded by designing a museographic element that allowed, not only to generate a link between the nine existing projects without mixing them, but to protect the exposed objects from solar incidence.

We parted from the thesis that Gunther Gerzso’s work is fundamentally based in space, as much in his early scenographic works, as in his pictoric work. When looking at a Gerzso’s painting, we perceive not a plain canvas, but a mystical place awaiting to be explored. The intention was to transmit this sensation to the room by using coloured surfaces that could be travelled through time.

We worked in a module that could suggest the massivity of prehispanic structures using monumental contemporary walls as reference. An element that replicates through the exhibition while changing proportions in every occasion and in which interior and exterior are completely different. The unit or module adapted to a morphology that referred to Alberto Arais’ frontons in Ciudad Universitaria, which were at the same time inspired by the ancestral ball games. Connections to Gerzso presented themselves again. In every fronton, a curatorial world works in an independent way, but remaining essential to the whole project.

The unusual constructive system used for the interior part of the museum was fundamental for managing such a big scale intervention. The walls are made of straw bale covered with a mix of sand and lime and a green coloured concrete finish.

The arrival to Gerzso Gerzso Gerzso is surprising because of the abscence of works. There is no hint of the exhibition but a series of overlapped volumes. While strolling around the room, interior spaces start to come up presenting a totally smooth surface painted in different green hues. In every typology of fronton a different wooden support can be found; from a table or a stand to a ramp or group of columns. The tour back, from the end of the room to the starting point, shows the nine expositions in dialogue with each other.

Anti-retrospective was the concept which made it possible to work with colour instead of the usual white background. Observing the works in a neutral environment wasn’t a priority anymore, but to establish connections with different supporting material. The exhibition design doesn’t touch the walls or columns of the room at any point. It is contained within the limits suggested by the frontons. The remaining space lets the building itself, the museographic intervention, and the exposition to be observed within a certain perspective while embracing the activities that will take place during the next months.

With this project, we want to offer an opened display that could mediate the relationship of the audience with the exposition and facilitate getting immersed in Gerzso. 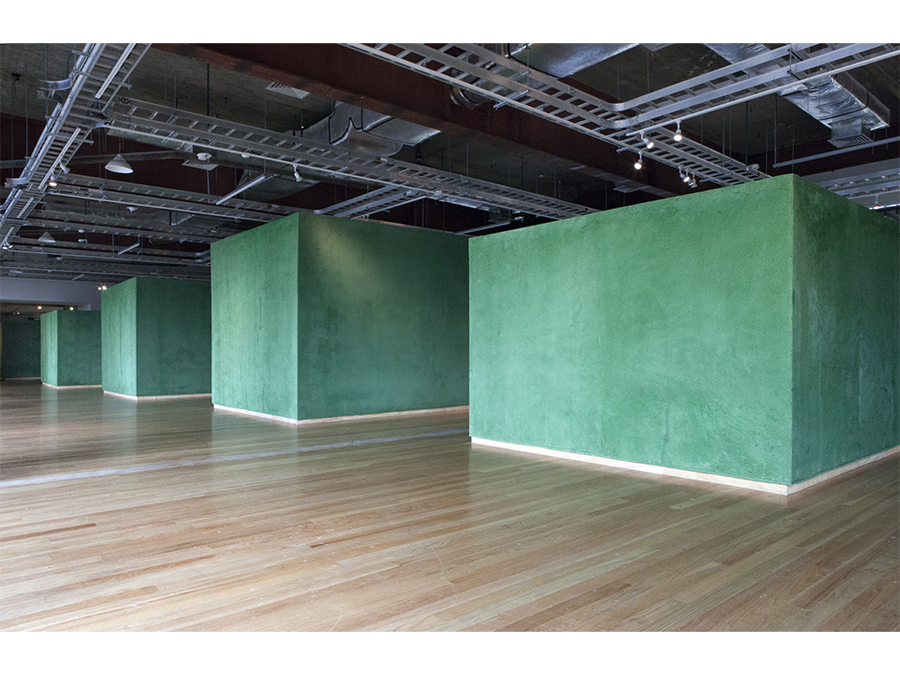 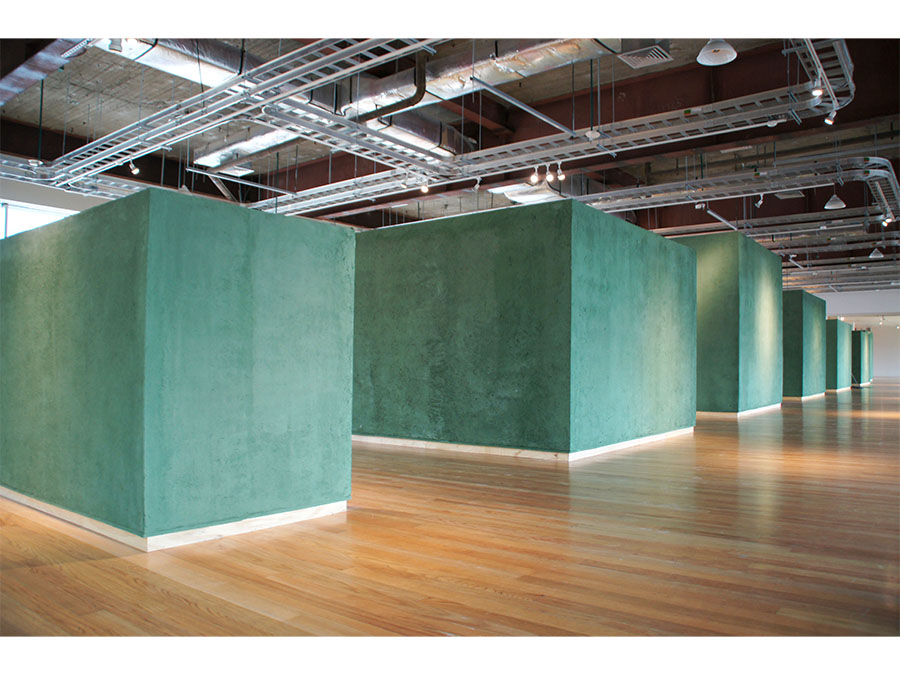 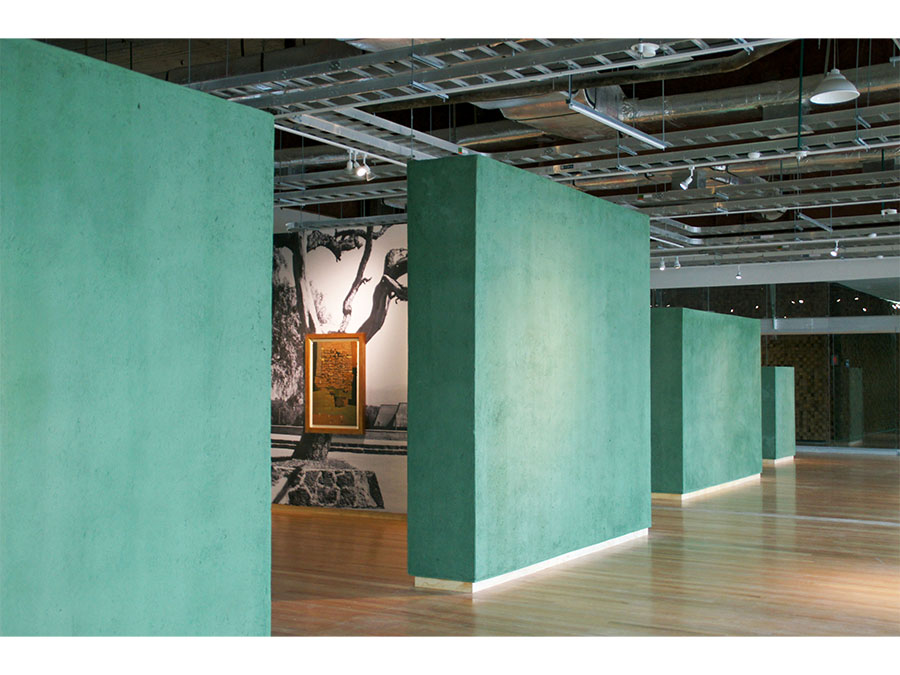 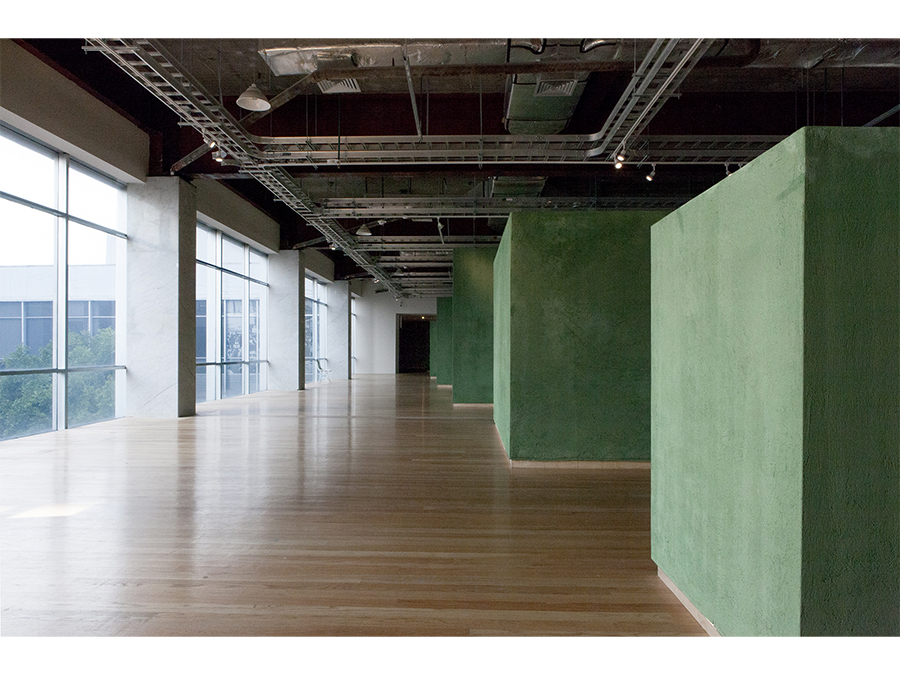 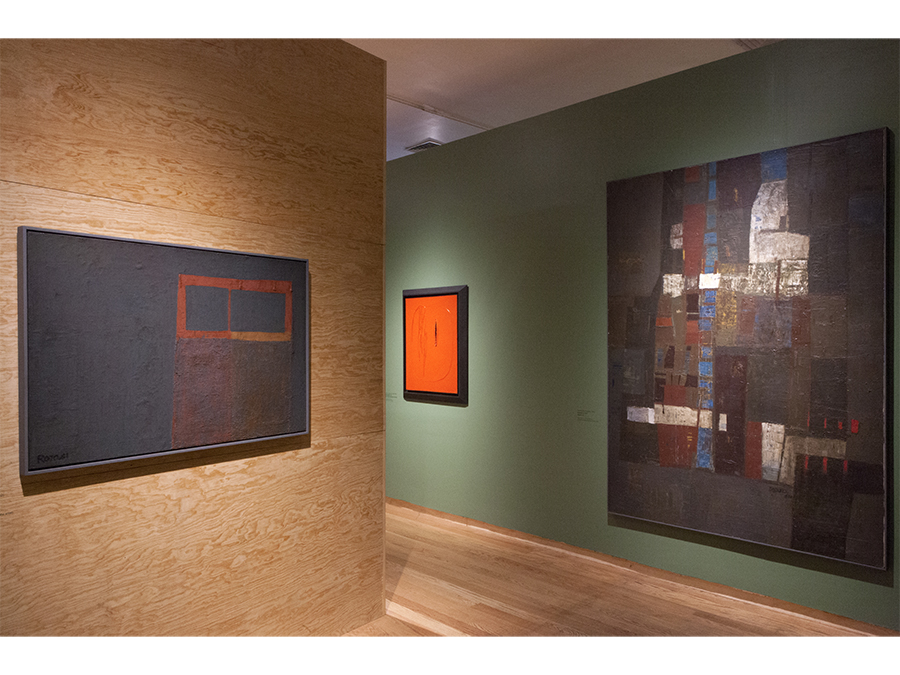 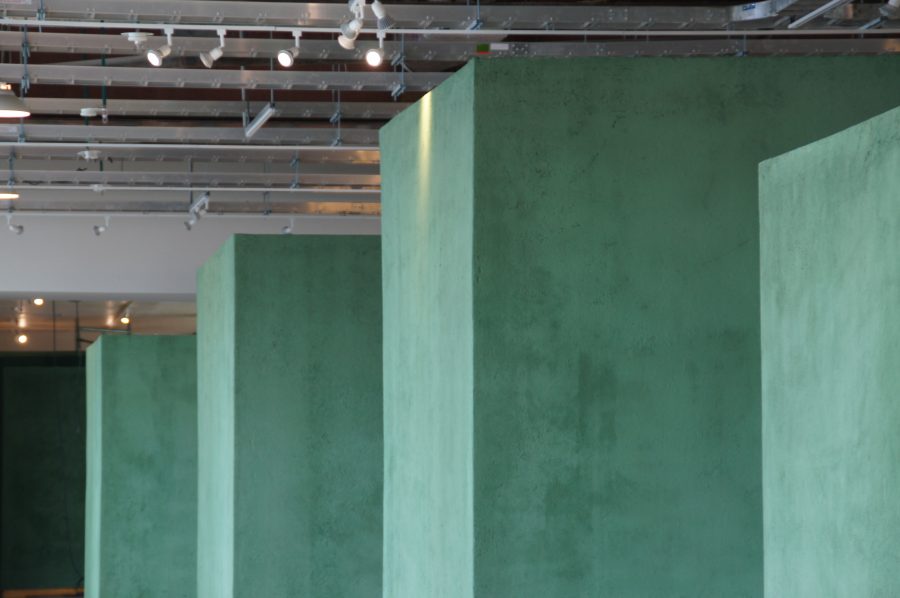